I am experimenting with discriminated entities to create a Media entity and MediaImage entity.

All media is stored in a single table, media, regardless of whether it is a MediaImage or not. Therefore, I don’t need to join based on a foreign key. I was hoping to be able to just use the discriminatorValue="image" meta attribute to define the parent/child relationship. Quick requires the joinColumn attribute so I have left it blank since no join is needed.

The SQL that gets generated throws a database error because it can’t complete the join statement. Here’s what the query looks like:

Here is the code for the entities:

How can I set up these discriminated entities in Quick so they originate from the same database table?

Update: I believe I was lacking the correct terminology in my original post. I’ll try to add some clarification here for anyone interested.

Quick’s discriminated entities feature follows the multiple table inheritance (MTI) pattern, which lets subclasses share common data from a parent table/class but distinct data for the subclass comes from a separate table defined by the value in a column from the primary table called the “discriminator column”. For example, a Media base class might have MediaBook and MediaAlbum subclasses distinguished based on the discriminator column, type. In MTI, the database schema for this example might look like this: 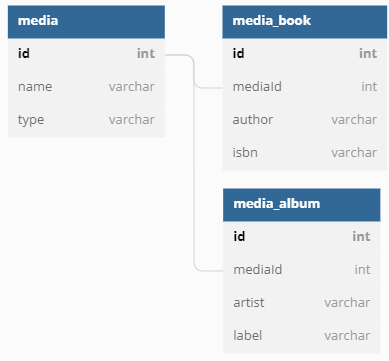 The MediaBook subclass entity would have all of the properties from the media_book table as well as the media table.

In my original example, I was looking to use a different pattern called single table inheritance (STI). STI is similar to MTI, except instead of distributing subclass data across multiple tables, all of the subclass data comes from a single table like this:

Both MTI and STI are popular recognized design patterns and each method has its pros and cons. Here’s a blog post that describes the differences between each in more detail.

Sometimes we don’t have control over the database schema we are working with so Quick should be flexible enough to support both MTI and STI. I created a pull request to add this capability to the library. Hopefully, it will be introduced into the main branch soon.

This PR enhances the functionality of discriminated entities and allows for chil…d classes to get their data from the same table as the parent without the need for a join column. This pattern is known as Single Table Inheritance (STI) and is quite common when developing apps where you do not always have control over the database or it's level or normalization. Additionally, I also gave Quick some additional flexibility with the discriminator column so users can now use dot notation to indicate if the discriminator value should come from a different table which might be accessible via a join.