[TestBox 4.5.0] Test Fails Only When Run After Other Tests

I encountered a peculiar issue with TestBox where one of my API integration tests fails only if it runs after other test bundles.

The problem is, if I run all my tests, this test fails:

The specific error in the response object messages is: “InvalidHTTPMethod Execution of (onError): GET”

However, if I run the EchoTest.cfm file by itself, the test passes as expected: 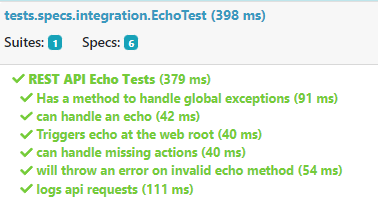 Status code 405 means “Method Not Allowed,” which I assume would fall into the category of a handler restricting a particular request method. However, this test is being called via `execute(), and is referencing the event directly.

If anyone has any tips for troubleshooting, please feel free to chime in, as I would be very interested in figuring out what is going on.